For as far back as I can remember, we spend at least one of our vacation weeks in Dennis, MA and for years we have had one or two meals during vacation week at the Sesuit Harbor Cafe.  The cafe was honored this year as a “Best of Cape” winner which was deserved but made the lines for food a wee bit longer.

Each year I stared in envy at the lobster rolls consumed by other members of my family.  No pity party, I typically ordered a lobster plate or some grilled fish…but I really wanted the lobster roll.  I don’t get a kick out of cracking the shell and doing all the work and I get royally skeeved by the tamale if that intestinal gook is in great abundance.

I had considered ordering the lobster roll and just eating it out of the bun, but that is like taking the cheese off a regular slice of pizza (guilty).  It really isn’t the type of behavior I want to model to my celiac son. Plus, ordering a roll-less lobster roll is just weird, it is not the same thing as a bun-less burger.

We went for dinner on our second night of vacation and I had a delicious grilled sea bass.  The way if works is that you stand in line, order your food and then hover over the tables in the picnic area with your cooler until a table clears.  It is a BYOB, so people come in with all sorts of good beverages.  The really smart people bring bug spray and candles too because this is “au naturel” eating and the bugs get fierce and the sun sets!  Many of the picnic tables are what I would call “communal” so if you are open to it, there is fun conversation and a great opportunity to check out what other people are eating. 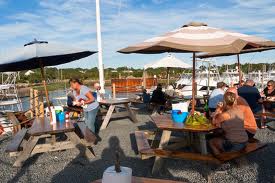 Three young women who were gabbing away about their triathlon training were next to us which was great because I felt myself sitting up straighter and sucking in my stomach.   When they had their dishes delivered by the waitress, one of them had a garden salad with a gi-normous portion of lobster salad heaped on top.

I leaned over and asked if she had made a special request or if that was on the menu.  It was on the menu!  I had missed it all of these years because why would I be looking at the salads when all I really wanted was a lobster roll? 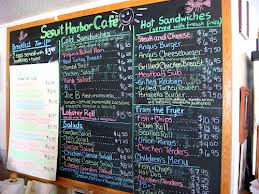 I turned to my family and said that we were coming back for dinner, not breakfast, because I really, really wanted that salad.  And sure enough, on our last night of vacation, we headed back to the Sesuit Harbor Cafe where I ordered my garden salad topped with lobster and a side order of potato salad.  That seems like a lot, but their potato salad is the best!

I am not exaggerating when I say there were at least three lobster claws….maybe even more because we stupidly forgot our candles…and the lobster was at peak sweetness.  I was in heaven.  Can’t wait to order the same thing year after year after year on future Cape Cod visits!  A perfect gluten-free end to a perfect week.